The truest definition of a win-win. The joy.

There’s been very few sides that have ever accumulated 100+ points in a season. Teams like Celtic, Barcelona and Real Madrid have managed it. The highest European point tally in history is held by Barry Town F.C, a Welsh side that got 104 and 105 points in back to back seasons back in the 90’s. But what’s the difference between all of their seasons and our season? They won the league.

I’m off on holiday. Management has well and truly sucked me dry this year and while it has been stressful, packing is on a whole different level. To help me de-stress, I decide to answer a question that’s been niggling in my head since the game the other day. I open my laptop and do a bit of research. As far as I can see, we’re the only team in recorded history to finish a season with over 100 points while not winning any silverware at the end of it. Yes, it was only a point but we really could have wrapped the league up. Teams like Newport, Morecambe and fucking Coventry are the teams that separated us from a brilliant season and a godlike season. Then again, we’ve already had offers from a few sports media companies to cover our story this season in a mini-documentary but it does feel like it will be focused on our lack of luck rather than our lack of killer instinct. I close my laptop with my arms slightly trembling out of frustration. I don’t know why I finding that fact out would even de-stress me as I start literally throwing my clothes into the bag. Get me some sun and a lime-pierced bottle of Corona ASAP.

As I start rearranging the newly creased items in my bag, I think about the documentaries. Either way, it’s some well deserved publicity for what has been an amazing season for an amazing squad. I mean the stats speak for themselves. Palmer claimed the golden boot with a whopping 26 goals and considering I spent over half of our budget in the summer on a striker, you think it was a waste of money but far from it. Harrison contributed massively to our season, racking up double figures in both his goal and assist tallies. Danny Rowe, who’s still recovering from his injury, was the only other player to score 10+ goals this season but we had a good amount of players with 8 or 9 to their name too.

Vickers actually tied for the golden glove with the Luton keeper Stech. They both managed 20 clean sheets but Josh walks away with the award as he conceded less goals across the season. You might be thinking that the awards have finally started to come to their rightful owners, we’re finally getting the recognition we deserve? Don’t be so naive. 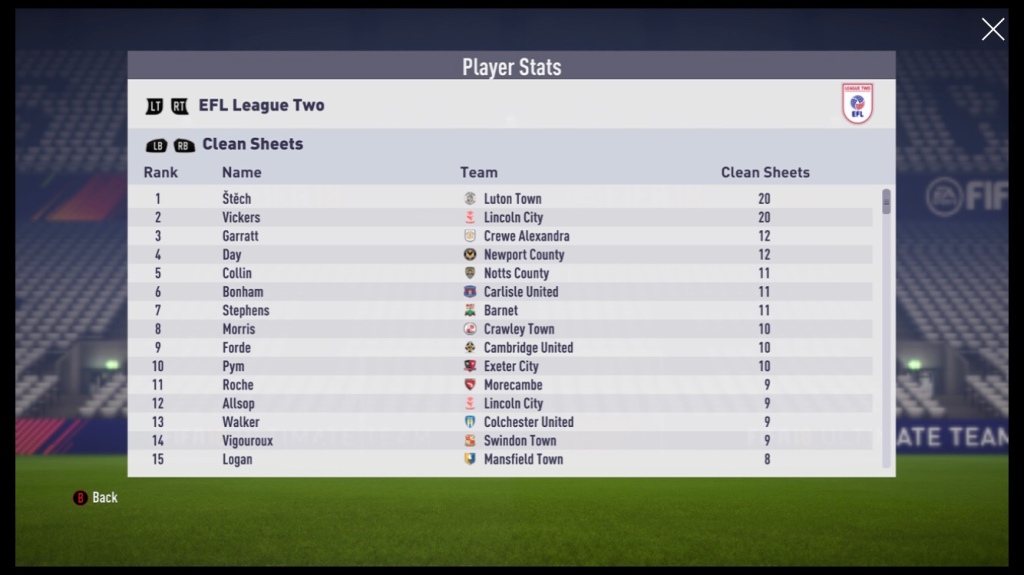 Mansfield striker Hemmings is named Player of the Season. Now don’t get me wrong, 17 goals and 8 assists to help your team clinch promotion is something that normally would be worthy of the award. But when Ollie Palmer is sat there with nine more goals and an extra assist, you have to question who makes these decisions. To put the cherry on top, not one Lincoln City player is deemed worthy to be in the League Two Team of the Season either despite having statistically the best striker, goalkeeper and back four in the league. Couple that with finishing 2nd with over 100+ points and there’s only one conclusion: the award board is fixed. Not that I’m bitter at all.

At the bottom of the table, Port Vale and Accrington are relegated down into the National League with our final day opponents Yeovil just remaining in the elite crew of 92. Crewe and Wycombe just scrape into the play offs on the final day with the latter getting in on just goal difference. To be fair, there is a 14 goal gap between them and Colchester but it’s still too close for comfort. They join Cambridge and Notts County in the battle to be the fourth team to play League One football next season.

An interesting stat when looking at a squad report filed by Batesy is that Anderson and Stewart are tied for most capped player of the season with them both taking to the pitch 56 times. Of course, that includes substitute appearances but it’s still surprises me that they are up that high. Most of what you’d call the regulars have somewhere between 35 and 45 appearances with players who had spells like Chapman and Pett are a little lower.

I hate airports. I know that’s not exactly a groundbreaking statement but I do. They’re too big yet somehow, you always feel cramped. They are full of people who are either too happy to be going on holiday or people who are depressed to be home from one. The environment is just a toxic place to be in. To try and exclude myself from the crowds, I find a seat at my gate and have a look around the world of football. I’ve barely had time to take note of other leagues as I’ve been so indulged in my own team.

At the top of the English footballing pyramid, two of the promoted sides are bouncing straight back down. Bournemouth join Brighton and Huddersfield as the trio of relegated sides with my boys Newcastle surviving pretty comfortably in 13th. There was massive drama at the other end of the table as Chelsea pipped United to the title with a +6 goal difference after winning their final game of the season to become the first team in 10 years to retain the Premier League. Summer signing Alvaro Morata definitely filled the hole left by Diego Costa’s depature as he scored 27 goals. City and Liverpool finish in 3rd and 4th to confirm Champions League football for next season. Tottenham’s domestic cup success meant their league form took a major hit as they finished all the way down in 7th place. They go into the Europa League with North London rivals Arsenal somewhat spitefully cheering them on to win the FA Cup. After ending the season in front of Everton, who take the league allocated route to Europe by surprisingly finishing 5th, Tottenham lifting the cup would mean they have a Europa League spot to spare. Oh, the irony.

*Meta-Note: Forgot to capture the Prem table before I started the next season, whoops!*

Going down a tier to the Championship, Norwich were clear champions as they ended the season 6 points clear of 2nd place Wolves. However, they were also comfortably above any other team in the remaining promotion spot. Cardiff, Reading, Fulham and Sheffield Wednesday are the sides in the play offs with the final two just pushing Leeds away from a chance for a long-awaited return to the Prem on goal difference. Barnsley, Burton and a team we came up against in the league cup, Preston North End have been relegated to play ourselves in League One next season.

Looking at who’s lucky enough to miss out on playing us this season, Wigan go into the Championship as champions with Blackburn following them up. Portsmouth deserve a special mention as they’re sitting pretty in the playoffs after winning the League Two title last season. I’d love to have a similar season to them next year but let’s not get ahead of ourselves. MK Dons are unlucky to miss out on a chance for a Championship return via the play-off’s by just 1 goal difference. Fleetwood, Wimbledon. Oldham and Northampton Town are the four teams that Lincoln along with Luton, Mansfield and another undecided team will leapfrog into League One.

I check my watch and see that only 17 minutes have passed since I typed ‘Premier League table’ into Google. As I’m a man of culture, I decide to have a look at some football from around the world. Well, Europe specifically because nothing else really matters in my eyes.

Luis Enrique’s Barcelona follow suit by retaining the La Liga title. In what’s perhaps the real shock of the division is Real Madrid finishing in 3rd behind underdog title contenders Sevilla. Atletico disappointingly miss out on Champions League football with Villarreal taking the final spot. Over in the Netherlands, Ajax won their 34th Dutch league title in style, 16 points clear of their nearest ‘challengers’ PSV. In shocking news, both Juventus and Bayern Munich also retained their respective league titles with the German outfit a staggering 19 points clear of 2nd place Bayer Leverkusen. Borussia Dortmund will disappointed with a third place finish and a sizable gap between themselves and 2nd place. There’s no need to even mention who won the league in France.

I spend the next hour just wasting time of the Internet, something I haven’t had much time to do since taking over at Lincoln. With about 25 minutes until my plane is due to leave, my phone starts to ring. It’s Joel Cooper, our young attacking midfielder prodigy.

“Hi gaffer, I just wanted to ring and tell you I’m thinking about leaving the academy. I’ve had a few offers to join other teams as a first team player and if you’re not willing to give me that opportunity soon, I’d like to know that.” Well shit. He’s not quite at the point I’d like him to be at but he’s a good little talent, I’ve seen him play a couple times and there’s no denying his potential. I sigh loudly as he waits for an answer down the phone.

“Listen Joel, I’m off on holiday for a week but Batesy is handling stuff while I’m gone. I’ll drop him a text with your number and get a contract drafted for you.” He thanks me profusely and puts down the phone. I send Kev a text with the number and asking him to deal with it. I don’t care about football anymore. At least for a week.

While I’m away, I’m only taking calls from my right hand man. And to be fair to him, I only get the one phone call. He gets us tickets to the FA Cup Final, courtesy of Mauricio Pochettino nonetheless. Apparently, he was very impressed with my Lincoln side that faced him in the Carabao Cup and wanted to congratulate me in some way. Who knew this manager malarkey had it perks? I fly straight into London the night before the final and meet Batesy to watch Tottenham lift their second piece of silverware after a 1-0 win thanks to a Harry Kane header in the first half. I spend the rest of the day trying to find Arsenal fans and watch their heads spontaneously combust due to the situation they’ve just been placed in. The truest definition of a win-win. The joy.

After I’ve got past my jet lag and walk into my office on the Monday morning, my phone starts ringing the moment my arse hits the seat. My arse pretty much falls out the seat when I hear the voice.

View all posts by cjshep99